* Pruned tomatoes. This is often discouraged though I don't understand why. I've heard that the cuts can open the plant to disease, but in 10 years I've never experienced that (knock on wood). I find that pruning increases air flow, reducing the chance of fungal and bacterial problems, and gets light onto the flowers in the center of the plant, increasing fruit production.
Posted by Brandon A. Barnett at 9:06 PM No comments:

Back home from vacation in the North Cascades of Washington. Many thanks to the friend who watered my massive garden with two cranky/kinky hoses. All is well.

Except for the half dead apple. Now it's all dead. Looks like one of the neighbors' tabbies crash-landed on it coming over or falling off the fence. Oh well. Now I can blame the cat instead of whatever I did wrong.

A 3-day weekend is ahead of me, and good. The yard is out of control and a long weekend will give me a chance to wrestle it before the summer garden party season.
Posted by Brandon A. Barnett at 8:54 PM No comments:

Before & After - Shasta Daisy 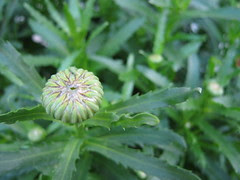 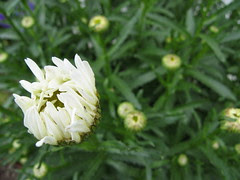 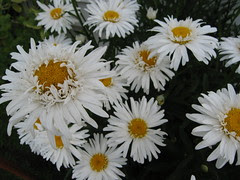 Posted by Brandon A. Barnett at 9:48 PM No comments:

* Weeded area around the apples and rebuilt the berms. Fencing didn't keep cats out, so I removed it and used the bamboo skewer method instead. The sad apple looks bad, but it's still pliable. I cut off the definitely dead leaves and will keep tending it unless it dies completely.

* Thinned the maximillions and supported them with the fencing previously blocking the apples.

* Weeded the blueberry bed -- the berries will ripe soon soon soon. In the blank area between the two bushes I planted sunflower seeds Vanilla Ice and Moulin Rouge.

* In the blank area in the cut flower bed (aka sweet pea bed), I planted sunflower seeds Apricot Twist.

* Weeded an area next to the apples and planted sunflower seeds "Flash Bed".

* Began dead-heading the Spanish lavender and, now that the plant is large, pruning off lower limbs that drag on the ground.

* Continued cleaning up the "potting shed" area under the bathroom window.

* In the kiwi bed, planted squash Yellow Scallopini against the fence, and zucchini Cocozelle which is a bushy rather than viney.

* Planted a Cuban basil in a pot, placed with the cilantro (which is already bolting, no worries, I like coriander too!) and arugula.

* Placed ant traps inside house where the sweet ants usually appear, and around the outside of the house where I've seen their trails.
Posted by Brandon A. Barnett at 8:08 PM No comments: 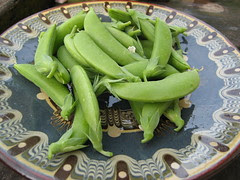 The snap peas were abundant and delicious this year, if a bit late. At the peak, I was gathering the amount above every afternoon. Just over the peak now.

I either ate them raw, or blanched them and tossed with everything from mustard to pesto. YUM.
Posted by Brandon A. Barnett at 7:12 PM No comments:

* Mixed remnant of one worm bin with remnant of compost under rotator and remaining bag of mushroom compost. Used about a third of this mixture to fill in kiwi bed.

* Made a better, though still not best, protection of kiwi vine plant. In the bed planted Creeping Rosemary Escondido

* Pruned and added more support to the climbing rose on the sidewalk strip.

* Cut back geranium. It will regrow quickly. May need to do this one more time this season.

* Planted more nasturtiums around yard in blank spots and to cover other vine plants as they die off later in the summer (such as sweetpeas).

* Planted sunflower King Kong seeds on the sidewalk strip and in the kiwi bed.

* Saw a hummingbird! hovering around the laurel bushes poking up over the neighbors' 'new' fence.

* Had another omg moment, while digging around in the kiwi bed, wondering what that hum was. Not another hummingbird. Bees! Hundreds! Hovering all over the shrubby tree that's growing over the driveway and currently flowering-- these awful little white flowers that turn brown and shed everywhere, with this allergy-inducing cloying smell. Bleh. Bees! 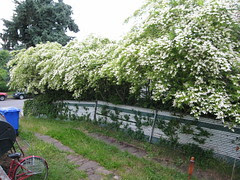 * Went to Garden Fever for advice about the sad apple tree. They think I'm under-watering -- who me? I'm a chronic over-waterer -- and suggested more water and an application of compost tea. We'll see. It may be too late. If so, I'll chalk up to The Learning and get another one in the Fall. Also, got a few other things while I was there (ruby red geum, unusual marigolds, Cuban basil).
Posted by Brandon A. Barnett at 9:06 PM No comments:

It's late in the planting season, the time when many gardeners will fill blank spots in their beds with colorful annuals.

Save some money and support Portland's Rose Festival by buying the flowers and plants that were used to create this year's Festival of Flowers design.

* Added support structures (string, ties, etc) for the fast-growing sweetpeas. Only necessary for the ones not planted against a fence.

* Noticed that the Golden Sentinel columnar apple isn't looking good. The leaves look a little wilty and some have large brown spots. Looked great a week ago. Hunh. Initial research suggests "apple scab" or "frog leaf eye spot", both of which are treated with a fungicide. Double hunh.

* Empty the rotating compost bin onto the ground below.

* Finished weeding herb bed and cutting back over-grown herbs.
Posted by Brandon A. Barnett at 9:23 PM No comments:

* Added more dirt to the bases of all the sweetpeas for support. Likely the last time I will need to do this.

* Weeded the snap pea bed, and planted Bells of Ireland seeds in a couple of blank spots. Probably too late in the season. I'll be surprised if they come up and develop well.

* Weeded volunteers (mostly other tomatoes!) from the tomato beds, and noticed that the marigold seeds didn't take well. Also noticed first fruit on the Sungold !
Posted by Brandon A. Barnett at 8:58 PM No comments:

These decorative alliums (onions) are new to my garden this year, planted as bulbs last fall. They didn't get as tall as I expected, but perhaps next year. We'll see. 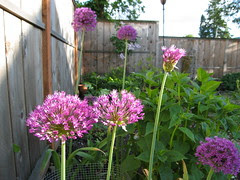 Alliums in various stages of bloom 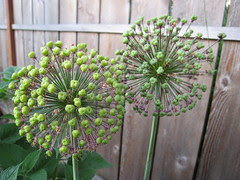 After the purple flowers fade, these green orbs appear.
The green-headed orbs are beginning to lean as the stalks yellow. I cut one and it's doing well in a vase with other cut flowers. I'm wondering if with enough time the green orbs will develop into bulbs that can be planted. That would be rad given how pricey the large decorative alliums can be.
Posted by Brandon A. Barnett at 8:50 PM No comments:

* Went to Garden Fever for squash starts.
* Cut back driveway overgrowth
* Began trimming and tidying the herb bed -- the cats enjoyed the fresh cut catnip especially.
* Cut flowers for vases inside -- not sure I've listed this "task" before, but I've been doing it weekly. One of the things I love about having a garden is having fresh arrangements in the house.
Posted by Brandon A. Barnett at 10:04 PM No comments:

Earlier I mentioned the snap peas were coming in. Oh boy howdy. I'll be eating sides for free for a couple weeks at least. Wonder how well they freeze? 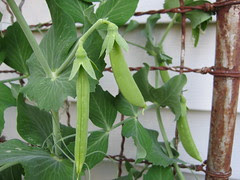 And EJD says you can eat the greens too!
Posted by Brandon A. Barnett at 9:32 PM 2 comments:

* In the snap pea bed, planted two annuals to fill in blank spots: Cosmos Sensation Purity, Brachyscome Toucan Tango. Also trimmed some of the plants that are crowding each other.

* Noticed the snap peas are fruited and some ready to eat -- which I did! yum! -- so will keep close eye on them next couple of weeks. Fresh sugar snaps, right off the vine!
Posted by Brandon A. Barnett at 9:32 PM No comments:

* Planted "curlique" seeds in the empty spot in the crocosmia bed, and protected from cats with skewers and an old window screen.

* Planted two coneflowers Double Decker in the back beds near the cafe ole roses.

* Weeded the snap pea bed, and planted an annual Blue Star Creeper. Noticed that some of the older plants are too close together, and noted this on my Fall to-do list. The goldenrod has powder mildew, likely from constricted air flow.

* Cut back some of the driveway overgrowth.

* Filled a yard debris bag with stuff I hacked out of the South side yard jungle.
Posted by Brandon A. Barnett at 8:12 PM No comments:

Wow! It's June already! How did that happen?

March was so dreary I wasn't able to do much in the garden so April and early May saw me rushing like mad until social plans encroached on my time. Now this blast of sustained and unusual hot weather is making it impossible to plant anything I missed in April. Just gotta skip straight to summer stuff.

I love the work, but it's supposed to be about enjoying the space too. And the last couple of weeks have been very enjoyable in the garden: Gin & Tonic parties, BBQ's, and my little brother's visit. 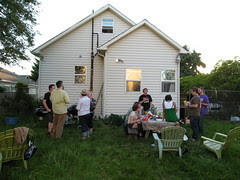 Posted by Brandon A. Barnett at 7:50 PM No comments: