* Added some copper decorations to the tomato cages for the pretty pretty but also because copper is good for the garden (uh, don't ask me to cite a source, just trust the Wooga). Ions or something...

* Soaked and then planted nasturtium seeds all around the garden in nooks and crannies, for their beauty but also because they distract pests. Oh and the flowers are edible.

* Sprinkled marigold seeds throughout the tomato bed. Marigolds repel pests.
Posted by Brandon A. Barnett at 10:25 PM No comments:

It's that magical time when late Spring begins to turn into Summer and the early hard work begins to pay off. Vines climb to the sun, roses and peonies bloom, bees zip around honeysuckle and lavenders.

It's also the time when mistakes become obvious, plants put in the wrong spot, or at the wrong time, seeds that never germ, pests unchecked.

This past weekend I had the "I've done everything wrong and I'm a loser" moment or two (or 30) in my garden. Here's a list of the mistakes and what I'm going to do about them.

Chinese lantern. After planting this in turned soil I did not put skewers around it to protect it from the cats, and they killed it dead. I will save that spot for zinnias or sunflowers, which I typically plant later in the summer.

Muskmelon. The seeds never sprouted. Don't know why. I considered buying a start from the nursery but have instead decided this is the perfect spot for that third tomato I had no space for.

Sidewalk strip weeding. While I concentrated on the back yard, the weeds on the sidewalk strip have gotten out of control which was stressing me! Solution: I'm going to just relax about it. The garden should be at least as much fun as it is work. These weeds are not threatening any plants; it can wait.

Roses health. The mites and their corollary disease and pest issues could have killed my favorite plant. I should have taken that problem seriously, quickly. Bringing it back to health is now a top priority.

Jupiter's Beard. These seeds never sprouted either. The packet says it can take up to 24 days so I'm going to wait just a bit longer but will save some dwarf sunflower seeds for the spot if necessary. Next year, I should be more realistic about which things I have success with as starts vs. seeds.

Dahlia. Dahlias should be planted on Mother's Day, which means that duh I should have purchased the tubers before, *well* before Mother's Day. By the time I went shopping, everything was gone. No new dahlias in the garden this year, but I will look for Fall red tag sales and get on the ball earlier next year. The spot I had reserved for a new dahlia will instead be filled with annuals.

* Went to Garden Fever and bought a few annuals for blank spots.

* Planted two tomato starts -- Aunt Ruby's Green and Sungold -- in the new bed, adding in egg shells for calcium and hair for protein. Put up tomato cages and re-arranged the red plastic to reflect light. Added skewers to empty dirt to block cats.
Posted by Brandon A. Barnett at 8:58 PM No comments:

Recent tasks lists mention a mite problem -- specifically a plague on my favorite plant, the Cafe Ole roses. The poor roses have a few other problems -- black spot and caterpillars -- all likely related to the mites weakening the plant's overall health. Are mites a cause or a symptom? Either way, I decided to tackle them first. 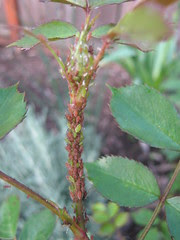 With ladybugs. Most nurseries sell them in a mesh bag, which can be stored in the frig for no more than 10 days, though it's best to use them as quickly as possible. Both for the ladybugs (how long have they already been sitting around the nursery?) and for the plant you're trying to save from the pest.

The mites got out of control because I attempted to kill them by blasting them with the hose. Does that method work for anyone?!? Seems like it just spreads them around to bother more plants.

Add a little rum & lime to the rest of that Coke and watch them do their work! 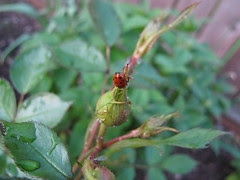 Took about 6 days for them to eat all the mites. With luck, they'll decide to make a home and create successive ladybug generations to keep pesty bugs under control. 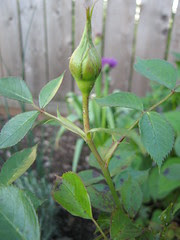 * Pulled up that parsley that sprung up from last year because it was bolting already.

* Set up a temporary protection of the kiwi since the cats are attacking it.

* Checked on the work of the ladybugs. Good job. The mites are mostly gone, but will keep a close eye on the affected roses.

* Brought lawn chairs out of the basement and cleaned them off for garden party season!
Posted by Brandon A. Barnett at 8:34 PM No comments:

Or, how to send Wooga into apoplexy. OMG, puppies! And plants.

Scanning garden calendars for this weekend, this particular event jumped out at me. Visit with puppies from Guide Dogs for the Blind while shopping among shrubs, perennials, grasses, etc.

* Added a small weed bin -- an old terra cotta pot -- behind the astilbes.

* Assessed the ladybugs' success combating the mites on the roses. Not bad. I'd say 60% of the mites are gone. Keeping an eye on it. May do more this weekend if necessary.

* Began pulling up old strawberries. They are past their peak and located in a bad spot, requiring far too much intervention to monitor water and shade given how few berries they are likely to yield this year. I'll plant new ones next year.

* Planted a small Armeria Victor Reiter next to a small weed bin. It's a flowering grass. Part of my attempt to pretty up and mask the bins.
Posted by Brandon A. Barnett at 9:22 PM No comments:

Continuing with the tomato theme (and perhaps demonstrating the amount of work involved in growing the goods), let's talk a little bit about building a raised bed for the plants.

I decided to use an existing frame (formerly dedicated to flowers for cutting), and began using its dirt for other projects. Once that soil was mostly elsewhere, I moved the frame in line with other beds, which also freed up the patio area near the lavender walk. 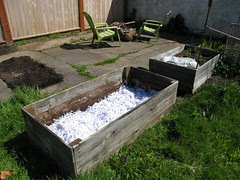 Since I placed the frame over grass, I started with a layer of shredded paper to help kill off the grass. The paper comes from my home shredder. Good-bye and thank you junk mail. 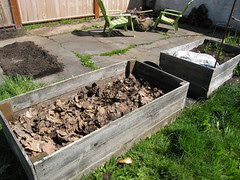 Then comes a layer of twigs and dry leaves. These provide drainage and will release nutrients into the soil as they decay. 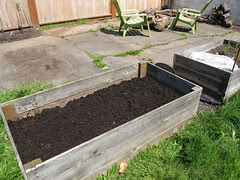 Next I added dirt mixed with my compost and mushroom compost. The soil level is deliberately low for two reasons. One, when I plant the tomato starts next weekend, I'll be adding much more dirt because they like to be buried, so I'll need room to do that.

Two, when the paper and leaves decay by the end of the summer, the soil will sink again, leaving me room to add a fresh layer of dirt & compost next year. Tomatoes need fresh soil each year. The Wooga plans ahead. 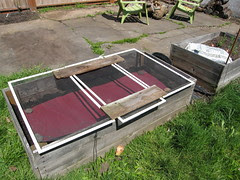 The soil needs to warm up a bit before the starts go in. The plastic will help with that (the 90 degrees predicted for Saturday will too!). The screens will deter cats from bathroom activities, though I caught the teeny Boo (this cat weighs maybe 3 lbs wet) sneaking under the screen.
Posted by Brandon A. Barnett at 7:10 PM No comments:

* Extended Saturday morning walk to Garden Fever, bought a few gladious bulbs and a couple of plants. No dahlia bulbs to be had.

* In the herb bed, planted English thyme and French Tarragon.

* Moved old raised bed and re-built soil from ground up. Covered with red plastic to prepare for tomato starts next week.

* Weeded strip between patio and the raised beds, and began adding layers of washed pebbles.

* Mowed front, side (North), and back yards. Killed my arms! And why does it smell like blueberry poptarts?

* Saw a lot of wasps/hornets in yard so carefully examined house exterior and other likely hideouts for nests. Found nothing.

* Placed ladybugs on the roses with mites. Waiting for the magic to happen.

* Planted mixed gladious in the sweetpea bed, which is also a cut flower bed.

* Planted Daisy Clara Curtis in the crocosmia bed, and another in the sweetpea bed.

* Uncovered and placed both BBQs, happy that no pests wintered over in them. :)

* Went to Portland Nursery on Stark. Also no dahlia bulbs! Wah!
Posted by Brandon A. Barnett at 8:14 PM No comments:

Like with most things in life, when it comes to gardening, I know more than some people and less than others. With a few years and a lot of mistakes behind my gardenbooty, Trial and Error have been my mentors.

Wouldn't it be great if there was someone who knew everything, especially about the pecularities of this climate, that you could just ask? Forgo wading through the Interwebs, forgo messing it all up big time, forgo denying yourself the joy of growing some tricky plant (clematis, I'm looking at you).

I present you with such a someone, or someones:

Staffed by volunteer Master Gardenders Monday - Friday from 10 am - 2 pm. See the website for more information.

* Weeded last of the back beds, from the cafe ole roses to the Japanese cedar.

* Thinned 3/3 of the arugula. The third sowing was done in the same pot that held cilantro last year and there are a few cilantro starts coming up also.

* Repaired the support structure for the climbing rose on the sidewalk strip, damaged in Saturday's surprise storm.

* Added more dirt to support the bases of all the snap peas and sweetpeas planted previously.

* Now that the apple trees have gotten a few good rains in, I created burms around them and added a small protective fence. Between them I planted a Verbena bonariensis (perennial) and some seeds of Jupiter's Beard Centurion's Shield.

* In the snap pea bed planted another Verbena bonariensis.

* In the small bed in the front yard, planted five seeds of Muskmelon Cantaloupe Earlichamp.

* In the jasmine bed in the front yard, planted a Yarrow Achillea Walter Funcke and a Verbena Obsession Apricot (annual).

* Planted two foxgloves Digitalis Alba in the back beds, near the fence, behind other plants.

* Chopped down and dug up a wheelbarrow full of sneaky blackberries.

* Noticed several plants budding and near blooming already: roses, alliums, peony, columbines, and two of the lavenders (white and Spanish) !

* Went to the new King Neighborhood Farmers Market and bought herb starts, English Thyme and French Tarragon.
Posted by Brandon A. Barnett at 7:29 PM No comments:

So, you might be wondering, which tomatoes did I buy at the recent Tomatomania event? Plied with free pinot gris, I had a little bout of tomatomania myself, purchasing not my usual one plant, but three. Three! Where am I going to put them?

Thankfully the weather is such that I have a week or two to figure that out. While I ponder, they enjoy a west facing window. 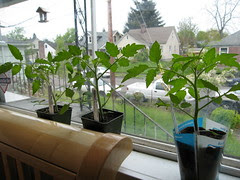 A lovely tangerine color when ripe, guaranteed orgiastic cries when eaten fresh off the vine on a hot summer day. I've grown these twice before with Great Success!

Um, I don't know. What was I thinking? There was some wine and huge sexy beefsteak sounded good.

The attached note described this greenish-pink tomato as having a sweet, spicy taste with sturdy flesh. Sounds good for salsa, no?

Older woman started exclaiming vividly in Italian, finally repeating "San Marzano! San Marzano!" til I was sure she would faint. She grabbed 4 or 5. If it's good enough for the Italian grandma, I want one too. Luckily she didn't snatch them all. I found one hiding behind the Siberian Black Dung Cherries no one seemed to want.
Posted by Brandon A. Barnett at 10:44 AM No comments: